At 7:00 the artists will give a talk on what to listen for in Eastern European music to help those new to the music, followed by the concert itself at 7:30 pm.

The concerts are at Sundin Music Hall, Hamline University, 1531 Hewitt Avenue, St. Paul, MN 55104.  Tickets for the Friday concert is by general admission, $12 for adults, $8 for students and $5 for all ACTC students , faculty and staff and will be available at the door and by phone through the Sundin Music Hall Box Office, 651-523-2459.  Parking at Hamline is free. For directions: http://www.hamline.edu/sundin/ 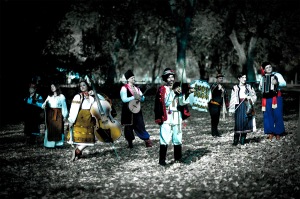 Friday’s concert features a selection of music that covers the Balkans to the Carpathians, including Bulgaria, Bosnia, Croatia, Latvia, Macedonia, Romania, Russia, Serbia, Ukraine, as well as music of the Roma, the Carpatho-Rusyns, and others. The audience might even see the musicians intermingling and collaborating on songs throughout the program, as nearly everyone on the stage has worked with one another at some point.

Nowytski, a first-generation Ukrainian, counts her time with each of these ensembles as heavily influencing her work in traditional Eastern European vocal styling: A recent study trip to Serbia with McKnight fellows Orkestar Bez Ime helped sharpen her Romany singing technique; a decade-long tenure with Mila Vocal Ensemble solidified in her a passion for style imitation and led to performances in Bulgaria and on A Prairie Home Companion; her time with the Ukrainian Village Band reawakened her love for her own ancestors’ music and prompted further study of Carpatho-Rusyn culture; and for nearly 15 years, Bulgarian Nufi-Kotel graduate—and Hamline alumnus—Gueorguiev has inspired in her a fierce commitment to accuracy in Bulgarian regional folk music. Bringing these musicians together for a joint concert promises an evening of the best of Eastern European roots music in the Twin Cities.

One thought on “Dec.6: Natalie Nowytski”